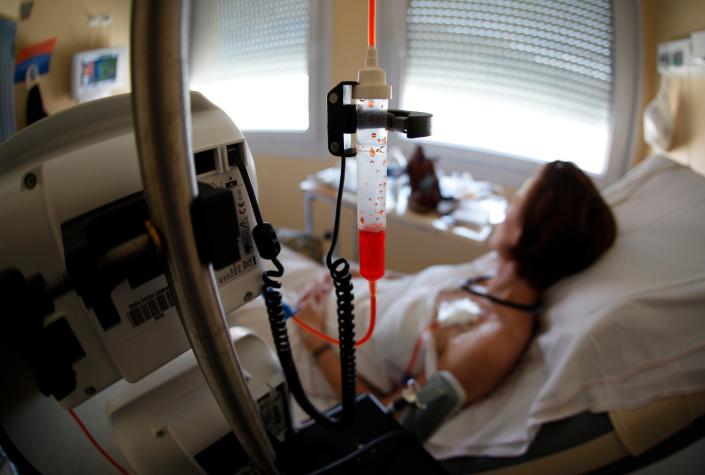 A 29-year-old woman in the UK was diagnosed with terminal lung cancer after months of shortness of breath and coughing up mucus.

Alex Barnard, a sales manager from Newbury, Berkshire, was sent home with cough syrup and the first few times he contacted his doctor, he told the Mirror.

He said he started feeling ill in March 2021 but repeatedly tested negative for COVID-19. Her cough persisted and she developed swelling around her neck and lymph nodes, so her doctor prescribed antibiotics and recommended some tests. However, he will not see her in office “because of COVID,” he said.

The Mirror reported that Barnard’s symptoms worsened throughout the spring. By May, she said she had lost so much weight that her clothes no longer fit, and she often coughed until she vomited.

“I was having trouble breathing and couldn’t talk without running out of air,” she told British media. “I was constantly coughing up phlegm, and couldn’t leave the house without a cough cup.”

When he was finally seen by his doctor in person, they sent him straight to the emergency department and got him tested for tuberculosis. The test came back negative. But at his next hospital visit, Bernard underwent a CT scan that would reveal something else “wrong” with his lungs.

He was treated for pneumonia, but his cancer was considered incurable.

After Barnard’s CT scan, doctors started talking to him differently, he told the Mirror. They admitted him to the hospital and told him he had cancer, but they still didn’t know what kind.

At the same time, Bernard was suffering from pneumonia, which took an extra toll on his lungs. Doctors pumped him full of IV antibiotics for the infection, but the cancer would prove difficult to treat.

He was sent home from hospital for two weeks between his initial scans and the official diagnosis.

“Things got really, really bad in those two weeks,” Bernhardt said. “I was sleeping all the time and I was so weak I couldn’t really stand up. My boyfriend had to carry me up and down the stairs because it was too difficult for me to do.”

When she returned, Bernhardt was told she had adenocarcinoma, a type of cancer that forms in glandular tissue. The cancer started in her lungs and spread to her liver, lymph nodes, shoulder, spine and pelvis. Because it was at an advanced stage, doctors told him the cancer was incurable.

“I was heartbroken at the news,” Bernard recalled. “I remember telling a friend and telling him that one day I was going to die from this disease.”

She is taking medication to prevent her cancer from spreading further.

When she returned to the hospital, Bernard was shuttled between the cancer ward and intensive care and placed on targeted oral therapy and an occasional ventilator. He also took some time to process his situation.

“Eventually, over time, I learned to accept that I would, and would, live with incurable cancer.” “I’ll be too sick to take care of my dog. I can’t walk on my own, let alone a sturdy bulldog.”

A cocktail of chemotherapy and targeted cancer drugs may give Bernard some time, or so she hopes. He said he started a new treatment called crizotinib in June 2022, and IV chemotherapy would follow.

“I can only hope that this will give me a lot longer than my previous two lines of treatment. I just want to stabilize my cancer and live my life as best as I can.” ” he told the Mirror.

During her time away, Barnard said she plans to travel, spend time in nature and be surrounded by loved ones. She is also talking about preventive screening.

“I think it’s clear that anyone with lungs can get lung cancer, and if you have a persistent cough, please don’t ignore it. Talk to your GP and get it checked, It could save your life.”