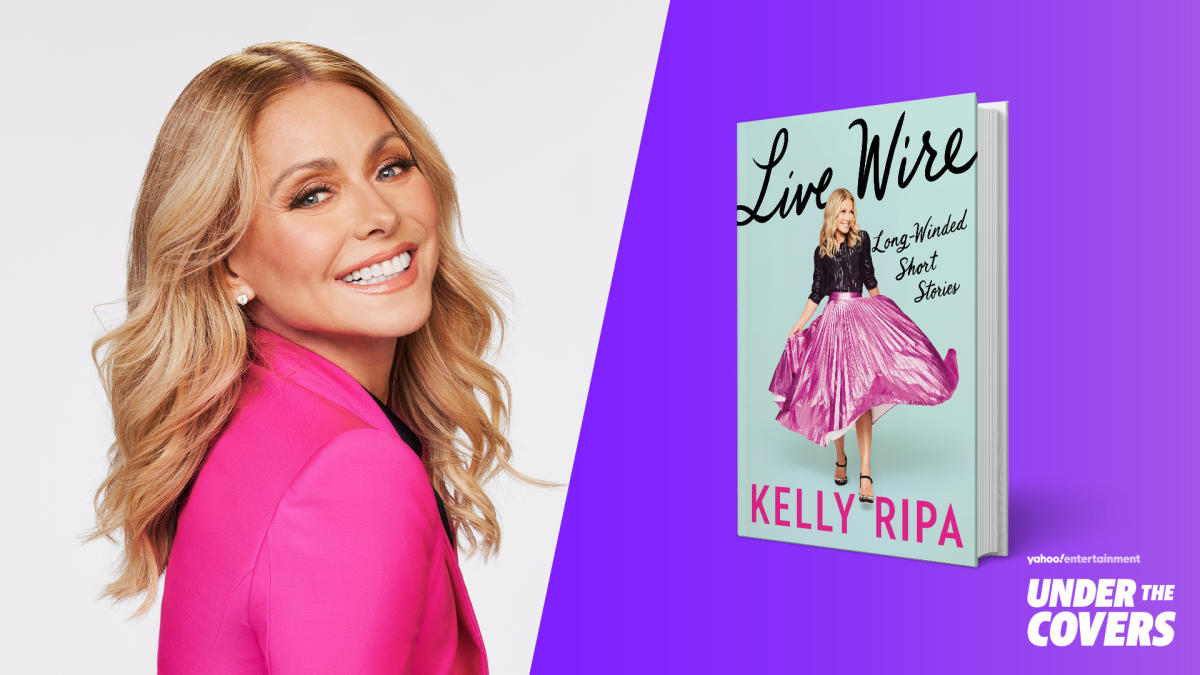 Kelly Ripa says publishing her first book, Live Wire, is about “correcting the record” — and she does so on topics including her complicated relationship with former co-host Regis Philbin, aging on camera and keeping the spark alive in her long-running marriage to Mark Consuelos.

“As women we are trained to not be disruptive in any way,” the Live with Kelly and Ryan host, 51, tells Yahoo Entertainment about her book of short stories. “If a person says something and it’s not true or inaccurate, we are trained to just take the high road, to never set the record straight no matter how detrimental it is to our own sanity, reputation, work life.”

So Ripa approached her storytelling with “the importance of correcting the record” in the more serious parts of the book. She says she “felt that I owed it to myself … to have an accurate representation of what actually occurred… What I just wanted to put out there was the truth.”

It’s no more evident than in what she writes about joining Live in 2001. Ripa was already a soap opera star on ABC — half of a popular All My Children “supercouple” with Consuelos — when she auditioned to be Kathie Lee Gifford’s replacement. While the network was gung ho about her, nobody at the show seemed happy she was offered the job, with Philbin at the top of the list. There were no shortage of red flags during negations, including Ripa getting the ominous warning: “Make sure you know who your boss is…” Her future co-star referred to the pregnant Ripa as “it” (to her face!) and griped about her “entourage” (to one hairstylist and one makeup artist, minimal by Hollywood standards).

While Ripa calls it “a great privilege” to have worked alongside the TV icon, who died in 2020, “it was not an easy working relationship.” So in the book, “I take the audience on a journey as to what it was like to be there, and how unfair it was for Regis first and foremost because … it was his show and nobody should have a workmate forced upon them.”

Ripa says she and her current Live co-host Ryan Seacrest have a rare situation as they’ve been friends for 20 years (and even vacation together), but there is a “common misconception” viewers have that co-hosts in this genre are “best friends” while that is “seldom the case… I make no illusions that there was this friendship [with Regis] that people conjure up — even though … I know that he liked and respected what I did on the air. I liked and respected him as well, and the handful of times that we socialized together off-camera were genuinely fun.”

What gets her is the “pervasive narrative that somehow I abandoned our friendship” after Philbin left Live in 2011 (dropping his departure news on air without so much as giving Ripa a head’s up). The narrative was propelled by Philbin himself in interviews, and in her book she prints some of those interview transcripts, correcting the record. (For instance, in 2015 he said, “I don’t see her,” when she notes that they saw each other in an elevator the day before.)

“I just find it baffling,” she says. “I mean we all work with lots of people and some people we have friendships with outside of the office and some people we don’t and that’s OK. But to pin the responsibility of that on one person? There’s so much talk … about power dynamics now, but that wasn’t a discussion back then. And nobody bothered to stop to think that maybe I was not in the position to decide who maintains a relationship with whom.”

She continues, “Most of this book took me maybe eight months to write — and the other year and a half was focused on those two chapters [about Regis] because it was hard,” she admits. “That’s why I don’t let my words really speak for me. I let transcripted conversations speak for themselves because I don’t wanna put words into people’s mouths. I don’t want things that weren’t on record to be in the book. I want it to be read the way it was stated.”

Ripa also speaks with candor about aging on TV and cosmetic procedures she’s had to stay camera-ready. She’s long discussed her use of Botox, and she writes in her book how she started with injections in her armpits, to combat perspiration on-air, before moving to her face a year later. She also details going to to a consultation for fat transfer breast augmentation, which would have involved removing fat from one part of the body, via liposuction, and injecting it into her “32AA long” breasts. Spoiler: She didn’t have enough fat in her bottom to be a candidate. Toward the end of the book, she writes about how she was recovering from a neck lift, calling it “a mild plastic surgery” because it required “no aftermarket parts.” She said Zoom calls during the pandemic led to a “deep self-loathing” of her neck, and she was tired of covering it with turtlenecks.

“I’ve always been open about it. I’ve always let everyone know in real time what I am doing and who is doing it because I think it is important to normalize it,” says Ripa, who lists all her doctors (including her facial plastic surgeon, cosmetic dermatologists and cosmetic dentist) at the end of the book.

“Men get uniquely praised for their bravery and their honesty,” she says. “Women are almost ashamed to admit it because they get shamed about it. Yet they also get shamed for aging. It’s a Catch-22. You can’t win. So I just thought I would normalize it so that my audience knows.”

Ripa said prior to starting Botox, “I thought I was the only person aging,” because her peers were pretending they didn’t. “I just kept thinking: My gosh … my life must just be more stressful than everyone else’s,” resulting in lines and wrinkles. “That’s why I write about cosmetic surgery, cosmetic procedures —because it is done and the really good doctors do it in a way that you can’t really tell.”

The Generation Gap host emphasizes that she’s the one calling the shots when it comes to what she does and doesn’t do. While there’s no shortage of fancy lighting, makeup tricks and “all kinds of stuff that can hide the reality, I know what I look like in reality. And at the end of the day, I have to be happy with me. I’m not doing it for anybody else. Nobody’s bullying me into doing it.”

Consuelos certainly loves her the way she is after 26 years of marriage. She dedicates the book to him, calling the Riverdale actor “the keeper of the spark.”

“Mark and I and our marriage evolved over time,” says Ripa, who reveals they had briefly broken up and got back together five days before they secretly eloped in 1996. “We feel deeply in love. For me, it was love at first sight… Slowly over time, he fell in love too.”

Ripa talked about nurturing their marriage while raising their three children — Michael, 25, Lola, 21, and Joaquin, 19 — as young parents with busy, high-profile careers taking them in opposite directions.

“When you’re raising a family,” she says, “it’s not always hot. It’s not always sexy. Sometimes you are just working parents. That’s what we were for many years. But we always maintained our connection to each other. We always tried to … prioritize our relationship and check in with each other. We were so busy trying to raise good people,” something she says they were aligned in doing, but they “always knew there would be a day that they would take off on their own and start their own lives.”

In a touching chapter in the book, Ripa details the bittersweet feeling of dropping off Joaquin at college in 2021 and officially becoming empty nesters. They’ve since embraced their new lifestyle.

“We felt very fragile as a couple,” she tells of us. “In that moment, we were emotionally drained… Suddenly it was the two of us and the dogs. I thought, ‘Oh, no, is this the beginning of the end? … Are we the couple that the youngest child goes to college and they find out they have nothing in common anymore? It was the complete opposite.” She says they “reconnected in that way that we had forgotten about. We forgot how much we enjoyed each other’s company.”

This past summer, they went on “our first vacation in 25 years without children — [and] it was a real vacation. It was an awakening. We had the best time.” She adds, “We called the kids a couple of times and tried to sound as though we weren’t having as much fun as we were having.”

She shares their secret to lasting love, saying, “It’s about careful maintenance throughout the duration of your marriage and not throwing in the towel the second it gets not hot or not sexy or you have an argument about something. Nothing besides abuse is insurmountable — and I’m very careful to say that in the book. Unless you are trapped in a loveless or abusive marriage … you can figure it out and get to the other side of that and have a real connection on the back end.”

Ripa ends her book looking ahead, including to life after Live, where she’s been for 21 years (also opposite co-host Michael Strahan, whom she didn’t mention in the book or this interview). She uses the words “retire” and “retirement,” so we ask how long she sees herself doing Live.

“It’s been the privilege of my life to host Live,” she replies. “I came to the show as a fan. I never saw myself hosting this show and I certainly didn’t see myself hosting” for two decades. “It’s been a great benefit for me. I was able to, in a very fickle business, have continuity and consistency for my children. They all went to the same school, had the same friends and grew up in the same neighborhood. I’ve worked for the same company for 33 years. It’s a very rare thing to be able to do in show business — to have continual employment that allowed me the freedom of not worrying about where we’re going to live.” Though she allowed that Consuelos “had to make a lot of sacrifices because he lived in other countries and [worked] on sets all over the world.”

She continues, “So I do talk about retirement … from a morning show perspective. It would be nice to be able to shepherd somebody else into that job because it is special. To watch a young person come, maybe [someone] beginning their family,” like she was at the started, and “help them … navigate that field. I would like to step behind the scenes more and let somebody else take the reins and enjoy the spotlight and help them navigate the pitfalls of the spotlight and help them tune out the noise that may riddle them with self doubt. That is important because there is no blueprint. Nobody really tells you – they just expect you to know, and it’s unknowable.”

She doesn’t have an exact timeframe yet, but knows she doesn’t want it to be a surprise —like the way Philbin announced his departure on air in 2011, giving her no head’s up, or being blindsided to learn Strahan was leaving for Good Morning America in 2016.

“I don’t like surprises,” she says. “I don’t like pulling the rug out from everyone. I’m more of a person that’s giving you a plan and saying, ‘This is what my plans are. What are you thinking?’ Because there’s power in the knowing. There’s power in knowing and there’s an honor to that.”