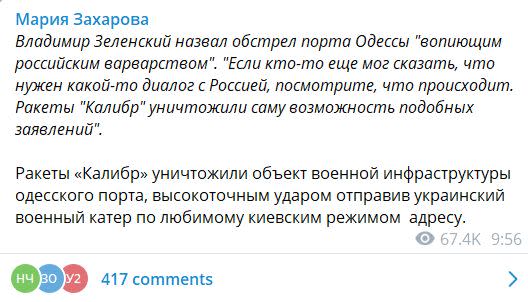 Representatives of the Russian Ministry of Foreign Affairs. Maria Zakharova Admitted that the missile attack on the port of Odessa was carried out by Russian troops, but came up with an excuse.

Details: Zakharova’s comments were in response to Ukrainian President Volodymyr Zelensky’s words that Russia’s brutal attack on the port of Odessa on July 23 was barbaric and proved the impossibility of negotiations with the Russian Federation.

Representatives of the Russian Federation had previously assured the Turkish side that they had “absolutely nothing to do with this attack.”

later on Evgeny Popov, A member of the State Duma of the Russian Federation admitted in an interview with the BBC News Hour that the attack on the port of Odessa was carried out by Russian missiles: he claimed that the target of the attack was the missile system, that it was Harpoon missiles. . It was allegedly destroyed in the port.

“We have not violated the Istanbul agreement. We have only destroyed the military infrastructure of Ukraine – and we will do it again,” Popov said.

Why this is important: Russia continues to talk about the legality of its actions in Ukraine, even though they have no ‘legitimate’ military objectives. Ukraine has not attacked the Russian Federation and the Kremlin has not declared war and is regularly changing its arguments and targets, calling the offensive a ‘special military operation’.

On the morning of July 23, Russia launched a missile attack on the port of Odessa, where grain is stored, but hit a pumping station, causing a fire.